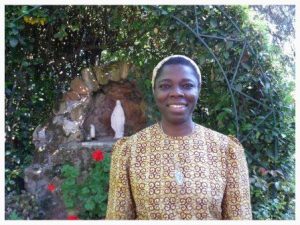 My name is Madeleine Ngoy Nyefonga. I was born on 8 December 1966 at Boende, Equateur, in the Democratic Republic of Congo. I come from a Catholic family of 3 children: one boy and two girls and I am the second in the family.

Apostolic and professional activities in Congo: